Viva: Emma Fitts Is Wrapping Buildings Up In Paintings

Driving into the car park of Auckland gallery Objectspace, I’m surprised by a prism-like display of colour that wraps around the facade of the modernist building.

Folded canvas swatches in primary hues are pleated and sewn together to form a curved dividing screen that encloses an outdoor room.

Perhaps it’s an installation, or a sculpture. It matters little, more so how it lures you in, begging for further examination of its soft, colourful form.

Trust Christchurch-based artist Emma Fitts to come up with such beguiling and interactive work, and luckily for viewers it will stay on display for a year.

Inspiration for Lapping at Your Door came from the avant-garde Irish designer and architect Eileen Gray’s famed holiday house in the Mediterranean in 1926, the home she designed for her then-lover, architect Jean Badovici. The couple named the villa E-1027, which was a secret code for their initials.

The original white modernist home’s facade was wrapped in soft blue canvas that filtered light and created a breezy outdoor terrace, which was unheard of at the time.

“I liked the look of the house, and the fact it was the first home Eileen designed — she wasn’t even a trained architect,” says Emma on the phone from her home in Christchurch.

She often finds inspiration for works through her research of historical figures.

“I’ve been interested in the history of Eileen Gray for a number of years now. My work often draws on architecture and it can be difficult to find women architects who were working during the modernist period. I came to Gray in a roundabout way — by looking at the work of other queer women artists of the 1900s. I tend to follow research paths and take notes on where and who they were hanging out with — even Frances Hodgkins name popped up when I was looking at Eileen’s circle.” 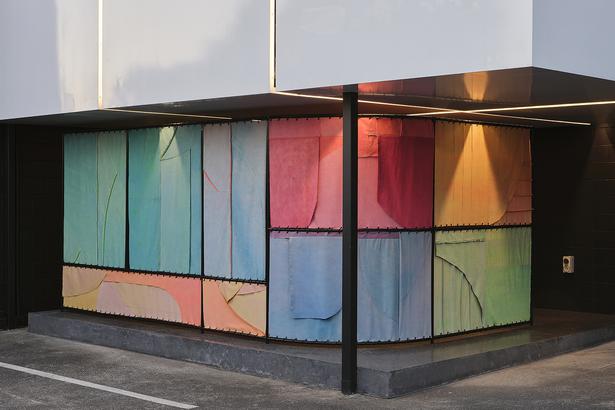 The 1920s and 30s are a rich resource for the artist — as it was a time of massive social and political change. Things were moving very fast to a more modern society.

“Queerness was beginning to become visible, albeit mostly in privileged circles,” says Emma.

Eileen too moved in these cliques and was openly bisexual and lived her life to the beat of her own drum — working as a furniture designer, one-time architect, then back to designer.

“I love the idea that she wasn’t concerned about the ‘master’ career. She fell out of the limelight after designing this house, but I don’t see her subsequent invisibility as a failure at all, it just gave her strength to go and do other things — she didn’t need the limelight to do so.”

This is the first project Emma has worked on that is displayed outside, so she needed to factor in the elements.

“It was fun to try a new way of hanging the work that would work for a more permanent structure, but would also allow for some movement from the wind, yet not feel static.”

The painted heavy canvas bolts were layered with vinyl-based Flashe paint, which is heavy in pigment and very flexible, and often used in signwriting.

Emma prefers to paint on an object, rather than a flat surface — loops, hoops and curves are all shapes she is drawn to — outlines that lead the eye to be inquisitive to both sides of a surface. 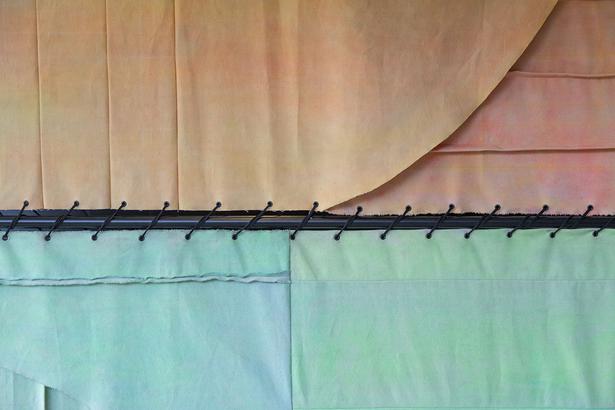 Details of 'Lapping at My Door'. Photo / Ginny Fisher

“The opportunity to make an installation like this was a place to push these ideas, to quite literally lead people to experience both sides of the work. I also wanted to play with the ideas of front and back, interior and exterior. Using the light and transparencies of the layered canvas also helped me mess with these ideas of inside and out.”

Connecting all the parts of the installation was a challenge for the artist — who although not formally trained in sewing, has learned on a needs level.

“My skill probably comes from being brutal with the machine. The straight line is my paradise! Most of the sewing, whether it be a pleat or a fold, still comes from a straight and simple line.”

She admits the work as very physical to make. Past experience led her to make the work in sections she could carry and lift on her own.

“I like to be able to do every aspect of the work myself, I think this relationship to the body comes through in my work — no length is taller than me or wider than my arms outstretched.”

The palette is rich, but has subtle earthy-coloured sections that counterbalance the saturation.

“Originally the colour palette came from my looking at Mannerist painting — I love the use of both natural and artificial tones in 16th-century paintings — I also like the way fluorescent-type colours also have their own glow and wanted to see how these could spread and land on the white and grey facade of Objectspace.”